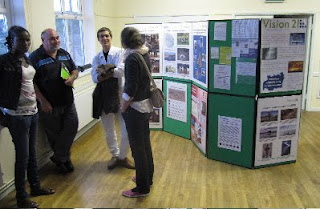 Philip Booth reports on AGM - a more detailed report with more photos can be found at his blog here.

The Ruscombe Brook Action Group (RBAG) formed in January 2005 to end the flooding at Puckshole and the repeated incidents of sewage getting into the Ruscombe brook. Since then the group has met monthly and learnt lots about water, sewage, biodiversity and more. We've worked with various agencies and seen some significant improvements: sewage pipes replaced, roots cut from inside pipes and a plan for further work.

We've also organised three seminars and held other public meetings, met with agencies to see improvements at The Lawns and Hamwell Leaze, initiated projects with University students and school children to look at water quality, produced information leaflets and much more. 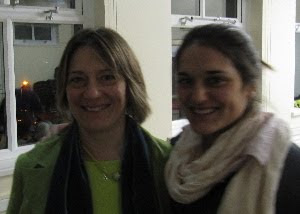 At our AGM in Randwick Village Hall, Chair, Zarin Hainsworth (pictured left with her daughter), outlined work this year. It included a walk along the 2 mile brook to identify problems, one day digging out silt from near a culvert and one day removing a vast amount of rubbish including two sofas, a tent, waste bins and of course a shopping trolley. Apart from work to improve the sewage system we are also delighted to have finally got agreement and funding for a grill and clearing out of the culvert at Puckshole. This initial measure will reduce flooding of the lane but there are further improvements planned for the site. We're also producing information on how to reduce our water use.

Another exciting development this year is Stroud Valleys Water Forum that RBAG helped set up with the four other water action groups in the area. We are together seeking a water management strategy in the Stroud area that will give greater protection from floods and drought.

At the AGM after Officers reports and elections, we heard from Adam Broadhead and Julian Jones from Water 21. They talked about how Stroud Valleys’ complex hydrogeology has been disrupted by artificial modification, urbanisation and intensification of agriculture. Infiltration zones such as fields and woodlands have been covered with paved, impermeable surfaces. We also heard about specific problems at Brigend and what solutions might be possible, the work in the Slad Valley and more. The evening concluded with a DVD preview of work in Australia around soils and water. We are now looking forward to another year of improvements along the brook.
Posted by Philip at 1:29 AM