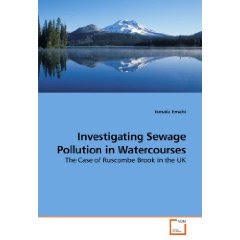 - Ismaila's report on the Ruscombe Brook has been made available on Amazon... but as one person commented according to the picture on the cover of report, Ruscombe Valley is now headed by a mountain similar to the Matterhorn ... perhaps its only a metaphor for what we have to climb with local authorities. See Amazon here. Ismaila did his MSc with Water 21 and support from RBAG in 2007 and his water sampling showed that between June and September water quality remained fairly good although deteriorated down the length of the brook - there were no sewage incidents during that time - looking at the silt along the brook - again this got worse as he got down the brook although the worst point was at Puckshole with lots of nasty faecal contamination.

Ismaila was the first student - since then we've had several with Water 21 and more this summer - possibly working on Ruscombe Brook. Water 21 website also has lots about Ismaila's report.
Posted by Philip at 2:40 PM