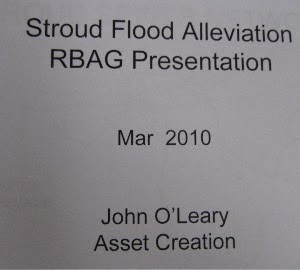 Don't read this article at meal times! This article below was sent to the Randwick Runner last week to update folk as we had a great meeting of the Stroud Valleys Water Forum where we were able to ask many questions of Severn Trent. 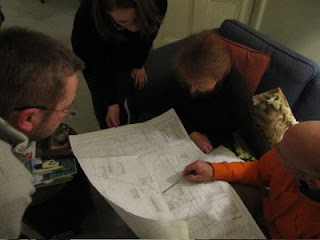 The Ruscombe Brook Action Group also met the night before to pull together questions and issues (see photo). We are also looking at the next phase for Puckshole and plans for Hamwell Leaze and The Lawns - see previous blog on this.

Other issues we managed to raise with Severn Trent at that meeting include a request for:
- more info re planned works,
- issues around new developments in the area,
- Severn Trent to set up a Customer liaison panel like Wessex Water so that we can have input and feedback from the company,
- them to extend their tariffs to include an Assist tariff that is best for those in financial difficulties (they already have many measures incl their ST Trust Fund but this would be a step further). 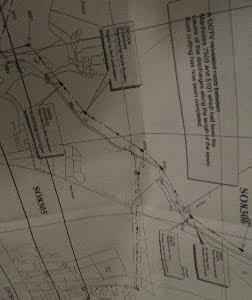 Anyway to that article:

Many will know that about five years ago there were well over 20 incidents of raw sewage getting into the Ruscombe Brook including the Randwick tributary. This was mainly due to the sewers surcharging usually during heavy rain. Since then the Ruscombe Brook Action Group (RBAG) have been meeting monthly and incidents have been reduced to a couple a year.

There have been many successes and actions along the way including improvements along key sites of the brook, clear-ups of rubbish and furniture in the brook, work with schools, sorting out misconnections where for example a washing machine had been discharging directly into the brook, a replacement of a pipe bridge, distributing several hundred fat traps to raise awareness about blockages, working to develop a flood catchment strategy for the whole Five Valleys and this December the fitting of a 13k new grill and culvert at Puckshole to reduce flooding. When we met with Severn Trent all that long ago they originally denied there was a problem. Since then we have come along way and they have now done extensive CCTV, flow monitoring, a manhole survey, developed a hydraulic model and much more along the sewer system. 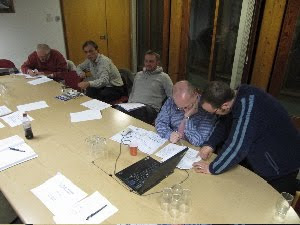 Last week we met again with Severn Trent at Ebley Mill and the year old Stroud Valleys Water Forum. John O' Leary (pictured second from right) from Severn Trent gave us a comprehensive presentation of plans for the area including the huge works at Slad and Cashes Green. At those sites vast pipes will store 180 cubic meters of sewage during heavy rain then discharge slowly into the sewers when flows have reduced. This will hopefully stop the handful of properties in the area from getting sewage in their homes.

John was also very honest about the problems and challenges. Severn Trent now admit there are large sections of our sewer networks that are inadequate. In recent years the water company has, each year, cut tree roots that grow into the sewer pipes in the Ruscombe Valley and Randwick and down the sewers to The Lake at The Lawns opposite Tricorn House. These roots cause blockages which can lead to the surcharges and blown manhole covers...and plenty of not very pleasant stuff in our fields and gardens. Indeed on one occasion we picked up two buckets of sanitary ware alone! 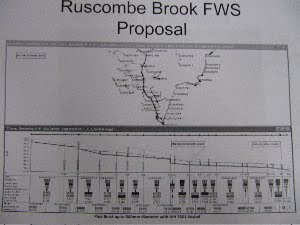 Relining does not appear to be an option as the pipes are not large enough, so a proposal is being submitted for specialised 'pipe bursting' that will lead to replacement of sewer sections. However this is an expensive option as much of the sewer network is inaccessible to the 40 tonne truck they usually use. There are also hydraulic issues and other challenges. So we need to now wait to hear whether the plans are accepted and what level of priority the capital works will get.

While I am delighted the problems have been clearly accepted and documented I am concerned that we will now have to wait a long time. Severn Trent's recent determination by OFWAT means they will have to cut staff. This is not good, but we will have to see what this will mean in practice. We understand priority must be given to people that face raw sewage in their homes but equally we need to address this issue which leaves us open to sewage incidents.

RBAG have a number of projects that we are working on and will continue to push for improvements. We would welcome new members or anyone interested in learning more.