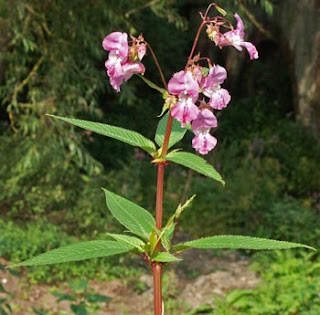 During our recent interesting walk along the Ruscombe Brook with the Farming and Wildlife Advisory Group representative, Chantal Brown, members of the Ruscombe Brook Action Group were warned to look out for the invasive weed, Himalayan Balsam. This destructive weed is rapidly colonising river banks and other areas of damp ground.

In the light of this I did send a piece put together by a local resident. This is what they wrote:

"It is an annual plant which grows to about 2 metres with purplish-pink slipper shaped flowers in June–August. When the seed pods are mature, they explode when touched, scattering the seed up to 7 metres. Himalayan Balsam spreads rapidly, suppressing the growth of grasses and native British plants. Along river banks this leaves the banks bare of vegetation in autumn and winter and liable to erosion and flooding.

"Chantal advised that it should be pulled whilst in flower and before it has a chance to set seed, warning that many Gloucestershire river banks were becoming infested with the weed."

Ruscombe Brook Action Group are hoping to organise several work parties in the next few months to clear scrub and coppice trees along the banks of the brook. If you would like to get involved, contact me on 755451.
Posted by Philip at 2:15 PM