Sewer relining to start at last!! 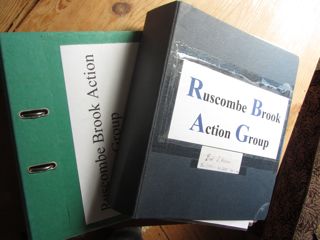 The SNJ will report tomorrow news re the relining of our sewer - I've copied it below. I was generous in my quote with Severn Trent as at times it has been quite a battle to get things done - and as noted on this blog before, we, in the Ruscombe Brook Action Group, are not wholly convinced that relining is the answer. Indeed at one point in earlier meetings with STW they had said the sewer capacity was insufficient and it needed changing. Apparently remodelling shows relining will be sufficient - let's hope so - and as I said in the quote STW have on the whole tried to work with us.

SEVERN Trent has this week started works to repair and strengthen a stretch of sewer near Ruscombe Brook to reduce the risk of sewage flooding into the watercourse. Over the years the sewer which runs near to the brook has become infested with tree roots - cracking the pipework and allowing sewage to escape from the system.

The lining is specially strengthened to prevent further root intrusion for the next 100 years. Work is expected to continue on site until mid October.

Mark Broomfield, programme engineer for Severn Trent, said: "We know that Ruscombe Brook and the wildlife that depends on it is important to the community. Our aim is to ensure water quality in the brook remains high, while causing minimum disruption to residents. Even though there will be no road closures and customers will be able to continue to use the system as normal while work is going on, residents will notice more vehicles in the area. "If anyone has questions or concerns about the work that needs to be done they can contact Severn Trent on 0800 783 4444."

Philip Booth, a spokesman for the Ruscombe Brook Action Group, that was formed over five years ago in response to incidents of sewage seeping into the brook, added: "We are delighted that sections of the sewer are at last being relined. We welcome these moves by Severn Trent and their willingness to find solutions to the problems faced here. We look forward to further work in the future to continue to improve the outdated sewage system and at present we are also working on ways to further improve the biodiversity of the brook."
Posted by Philip at 10:01 AM